Which old (British) telephones are best

The British (1930's -1940's) era older 1/232 (pyramid phones) are rarer, but they were designed without an internal bell, which is fine as an antique, but they don't have that lovely bell sound (unless you buy a separate bell). However I love the shape. Separate bells range between £25 and £75 (depending upon type).

My personal favourite amongst all the working series telephones with an internal bell is the ivory 312 or 332.

In summary I believe all UK based Bakelite telephones made before the late 60's are classic and collectable.

The main thing to avoid is ITI (India Telephone Industries) 300 style telephones, these are hard to spot until you get up close, but they are VERY VERY poorly constructed and I believe are nearly worthless.

I also recommend you have at least one modern (tone dialling) phone because when you are used to bush button phones the rotary phones appear to take ages to dial the number (particularly long distance calls).
at April 11, 2006 No comments:

Vintage 746 telephone and 706 telephone dials are lovely high quality mechanical devices (similar in many ways to antique clocks) however be... 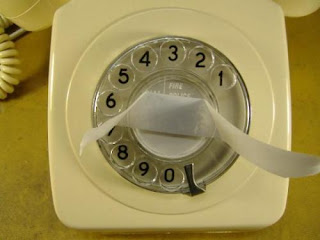